With the summer temperatures peaking, we’ve come up with a melon and raspberry fuelled rum cocktail to help you keep cool.

The melon season is in full swing in Kazakhstan with honeydew melons and watermelons both at their sweetest. You can find piles of ripe melons on sale all over the country. Its hot, arid climate is particularly well-suited to this instant summer dessert. Stalls appear on street corners with tempting mounds of golden yellow and green streaked melons.

We’ve used melon in a cocktail this time round, along with raspberries, white rum or vodka and Martini Fiero, an orange-flavoured aperitif that’s been a hit with the KCC crew this summer. You can also try melon in a seasonal salad with halloumi cheese – here’s our recipe for this summertime special from a few years back.

If you’re feeling down after all the partying in December, then never fear as Russian Christmas is here! To help celebrate it in style we’ve opened up our Vodkatopf (a slavic cousin of the Rumtopf) and used the fruit that’s been stewing in the vodka since summer to make a booze-infused fruitcake.

In Russia, Christmas is celebrated on 7 January – the Orthodox Church still follows the Julian calendar rather than the Gregorian calendar whereas Russia switched to the latter in 1917. The switch created a 13-day lag between the calendars so, for followers of the Orthodox faith, Christmas Eve falls on 6 January and 13 January marks the end of the old year

To make the vodkatopf we poured vodka over layers of different fruits as they appeared over the summer. The apricots, cherries and raspberries of early summer were followed by peaches and plums to make a great , fruity vodka for shooting or mixing. As an added bonus, the preserved fruit went into a the fruitcake mix. We decorated the cake with melted white chocolate and crushed almonds and used pumpkin and pomegranate seeds as the finishing touch.

This week saw the 100th anniversary of Russia’s October Revolution, which led to the creation of the Soviet Union. To mark this momentous occasion in world history, Knidos Cookery Club has turned to a soup made from the close relative of a vegetable that was at the heart of Soviet cuisine – the humble cabbage.

The cabbage, and soups such as shchi that were made from it, was a mainstay of the Soviet diet. I remember hearing jokes about it when I was a lad such as this gem:

A. A Soviet meat queue.

We’ve used Chinese cabbage as a twist on the traditional recipe that uses the more familiar member of the Brassica family and spiced up the mix with a few Shiitake mushrooms and some chilli powder.

It makes a great accompaniment, along with a few shots of vodka, to October: Ten Days that Shook the World, the classic 1928 Soviet silent classic directed by Sergei M. Eisenstein and Grigori Aleksandrov (which is available on BBC iPlayer until the end of this November).

The film was based on John Reed’s book of the same name, which told the story of the revolution from the abdication of the last Czar to the Bolshevik seizure of power. Another good read on the same topic follows Lenin on the Train, an account by Catherine Merridale of Lenin’s trip back to Petrograd on the eve of the revolution.

You’ll need a good hearty stock for this soup, so prepare some in advance or use stock cubes. Heat the oil in a heavy-based pan and then add the chopped onions and garlic. Cook for 10 minutes or so over a medium heat – while it’s cooking chop up the mushrooms and green pepper and then add to the mix,

Stir and cook for five more minutes then add the chopped tomatoes, black pepper, chilli flakes and bayleaf and cook until the tomatoes start to collapse. Then add the vegetable stock and bring to the boil.

Next add the shredded cabbage and cook for ten minutes or so until the cabbage is tender. Add soy sauce, remove the bay leaf and serve with brown or black bread and a shot of vodka!

Welcome to the first Knidos Cookery Club of the new year. While many of us have returned to the daily grind, it’s still party-time in some parts of the world.

in Russia, people are preparing to celebrate New Year’s Eve on 13 January – the Orthodox Church still follows the Julian calendar rather than the Gregorian calendar, which Russia adopted after 1917’s October Revolution. This switch created a 13-day lag between the calendars so, for followers of the Orthodox faith, Christmas Eve falls on 6 January and 13 January marks the end of the old year.

A centre-piece of Russian tables on this day, as people prepare to welcome in novy god, is the Olivier salad – a concoction of boiled potatoes, pickled cucumbers, peas, eggs, carrots and boiled beef or chicken in a mayonnaise dressing. This version dates from Soviet times as all the ingredients could usually be procured even in the depths of winter and despite chronic shortages. 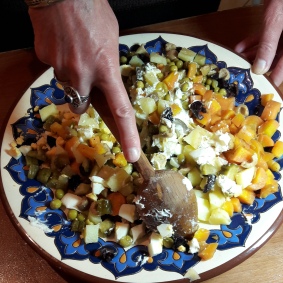 A version of the salad, omitting the meat and eggs, is made in Turkey where it’s known as Rus Salatası – we’ve made our own veggie version that replaces the meat (Olivier purists look aside now, please) with black and green olives and uses sour cream in place of mayonnaise.

When I lived in Moscow in the 1990s I got it into my head that Olivier salad should include olives (mistakenly thinking that Olivier referred to olives rather than the salad’s originator!) and I was disappointed when it came minus olives – so now I finally have a chance to put this right!