This time round on Knidos Cookery Club we’re returning to Georgia for some culinary inspiration in the form of pkhali, a type of starter made from walnuts, herbs, spices and whatever vegetable happens to be in season, such as spinach, beetroot, aubergine, cabbage or carrot. 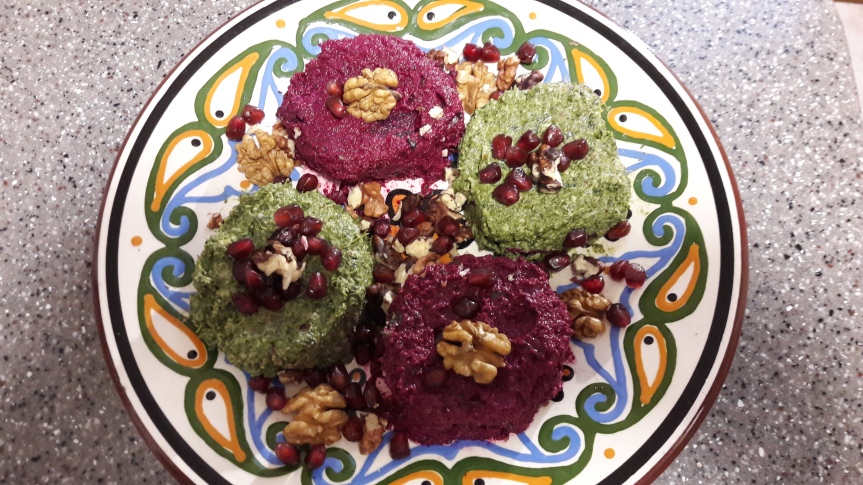 Walnuts are widely used in Georgian cooking – besides pkhali, they can be turned into  satsivi, a thick paste similar to hummus, and  bazhe, a sauce made with the holy trinity of Georgian herbs – blue fenugreek, ground coriander (cilantro) and crushed marigold flowers. These combos can be mixed with fresh cucumbers and tomatoes as a salad dressing or stuffed into tongues of fried aubergine (eggplant).

Staying on the walnut theme, on a recent visit to the former home of famous Kazakh writer Mukhtar Auezov in Almaty, Kazakhstan, the guide gave me a handful of walnuts from the gnarled old tree in the garden of the writer’s house. These nuts were used in the making  of today’s pkhali recipe.

Auezov was famous in Soviet times for writing The Path of Abai, an epic historical novel based on the life and teachings of Kazakhstan’s most famous poet and composer Abai Qunanbayuli, who had been a neighbour and friend of Auezov’s grandfather.

It was said in the Soviet era that all were equal, but some were more equal than others – and this was certainly the case for Auezov after he won the Lenin Prize in 1959 for his four-volume epic novel about Abai.

The prize came with a sackful of roubles which he invested in a two-storey house, which is now a museum dedicated to his life and work. The house was lavish by the standards of the time and was designed by the architect who designed Almaty’s Abai Opera Theatre.